Chanel No. 5 - perfume for women

No. 5 by Chanel - The timeless classic fragrance from Coco Chanel created by Ernest Beaux in 1921. This iconic floral aldehyde fragrance is one of the best selling perfumes of all time. "The now and forever fragrance. The ultimate in femininity. An elegant, luxurious spray." --chanel.com

"A WOMAN. A DESTINY. A PERFUME. Created by Gabrielle Chanel to be the ultimate in femininity, N°5 has cast a spell on millions of women - and men - around the world. Inimitably luxurious and infinitely seductive, its legend lives, each year adding to its mystery, its depth, its desirability." --chanel.com 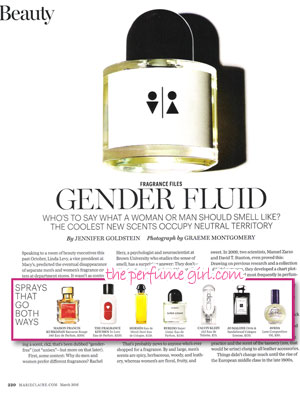 Why do men and women pefer different fragrances? ... By the time the commercial fragrance industry exploded, post-World War II, gender distinctions were in place - and marketing just reinforced them. "When Marilyn Monroe came along and said all she wore to bed was Chanel No.5, perfume became connected to sexuality and glamour, which really changed things," says [Rachel] Herz [a psychologist and neuroscientist at Brown University who studies the sense of smell]. ... Ann Gottlieb credits some of this line blurring to the growing influence of Middle Eastern perfumery. "We don't differentiate between 'male' or 'female' scents in the Middle East," agrees Sheikh Majed Al-Sabah, a Kuwaiti fashion executive who launched his own fragrance line, The Fragrance Kitchen, in 2005. Rose, for example, is universally loved. "I'm a huge fan of the original Paloma Picasso," he says, citing the (women's) perfume made with rose and ylang-ylang. "And you'll sometimes see bottles of Chanel No.5 and Shalimar on men's vanities in this region." 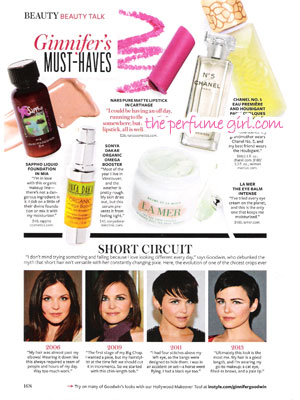 Beauty Talk - Ginnifer Goodwin
The refreshingly frank actress explains why she's loath to grow out her cool crop, the secret to her signature cat eye, and the one thing she absolutely will not do on her days off.

Ginnifer's Must-Haves
"I alternate between these two scents. My grandmother wears Chanel No. 5, and my best friend wears the Houbigant."

Jovan Musk, $20.42 -- Though its heyday was in the '70s, this skinlike scent still smells modern. Musk notes get a bad reputation for being animalistic, sweaty, even sleezy. (That could be due in part to the mass production of the ingredient beginning in the '50s, when it was used in everything from laundry detergent to dish soap.) A good synthetic musk (like the one found in Jovan) can smell "very clean," says scent designer Dawn Goldworm. "It enables all of the ingredients in a perfume to stick together and makes it softer." Adds perfumer Francis Kurkdjian, "Jovan also has a floral quality that's very No.5-ish." 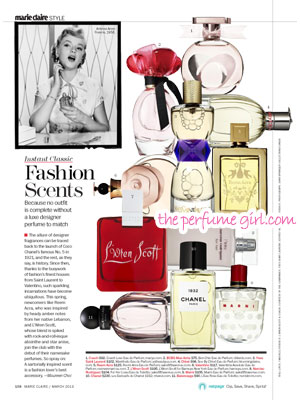 Fashion Scents - Because no outfit is complete without a luxe designer perfume to match.

The allure of designer fragrances can be traced back to the launch of Coco Chanel's famous No. 5 in 1921, and the rest, as they say, is history. Since then, thanks to the busywork of fashion's finest houses from Saint Laurent to Valentino, such sparkling incarnations have become ubiquitous. This spring, newcomers like Reem Acra, who was inspired by heady amber notes from her native Lebanon, and L'Wren Scott, whose blend is spiked with rock-and-roll-esque absinthe and star anise, join the club with the debut of their namesake perfumes. So spray on: A sartorially inspired scent is a fashion lover's best accessory. 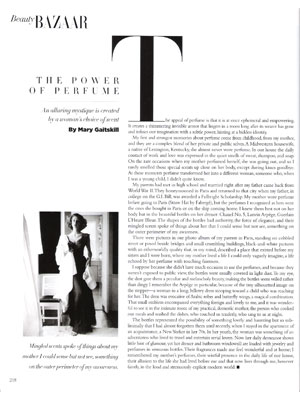 Raising the Bar
Let's get one thing straight: $75 is a lot to pay for a bar of soap. But this isn't just any old soap: it's Chanel No. 5 combined with ultramoisturizing glycerin and transformed into an 11-ounce bar. It even comes with its own Chanel-engraved dish. And if you consider that it could take up to two months of daily use to get through a bar this large, that boils down to $1.25 a shower, which is way less than our daily Starbucks habit. So maybe we'll just brew coffee at home until the last rose-and-jasmine-tinged suds go down the drain.

Om Marilyn's Makeup Table
Norma Jean Baker wouldn't have been Marilyn Monroe without cosmetics. Here are some of the products that enhanced her magnetic sex appeal.

Chanel No.5
"Five drops of Chanel No. 5" is what Monroe once told a reported she wore to bed. The actress reportedly took ice baths sprinkled with the perfume. 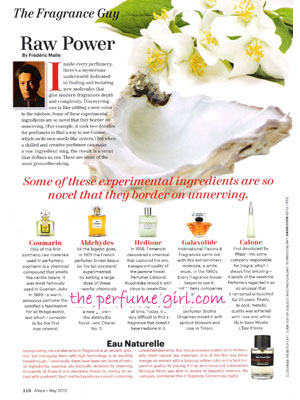 Aldehydes
As the legend goes, in 1921 the French perfumer Ernest Beaux (or his lab assistant) experimented by adding a large dose of these powerful chemicals to a classic, floral-oriental structure, inadvertently creating a new genre -- the aldehydic floral -- and Chanel No. 5. 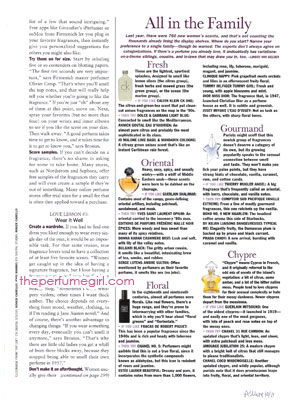 Floral
In the eighteenth and nineteenth centuries, almost all perfumes were florals. Like real flowers, there's a huge range, and they're prone to intermarrying with other families, which is why you'll hear about "floral greens" and "florientals."

Chanel No. 5
Perfumers might quibble that this is not a true floral, since it incorporates the synthetic compounds known as aldehydes, but this icon is redolent of roses and jasmine.

The Classic Perfume - To build mystique for Chanel No. 5 Chanel would give the fragrance to notable women, then claim she didn't have any more - increasing the demand for it. --Four new fall books revisit the glamorous life of Coco Chanel, the designer who brought knits and pearls to the wish list of women everywhere. The Books: Coco Chanel: An Intimate Life, by Lisa Chaney; Sleeping With the Enemy: Coco Chanel's Secret War, by Hal Vaughan; Chanel: The Vocabulary of Style, by Jerome Gautier; Intimate Chanel, by Isabelle Fiemeyer and Gabrielle Palasse-Labrunie.
("Dos, Don'ts, News and Views." Glamour Sept. 2011: 104.)

Sexy Scents to Spice up your Scent Life - Sexy Classics: "Classic fragrances are powerful because they're made to be recognized and to last all day," says Malle. These four were each the first of a kind, and they all exude warmth and sensuality -- but it very different ways. [Perfumer Frederic] Malle explains... Chanel No. 5 (1921): "This was the first floral fragrance to use a huge dosage of aldehydes -- molecules found in citrus notes that provide long-lasting freshness. It has thickness and sexiness in its base, from musk, vanilla, and coumarin, but the light flowers and aldehydes on top dilute the scent's oriental nature. It creates sex appeal without shouting" (chanel.com).
(Edgar, Jolene. "Sexy Scents." Allure Dec. 2010.)


View all Chanel perfumes and fragrances