Feve Delicieuse by Dior - Fève Délicieuse is a new sweet smoky gourmand fragrance for men and women build around the Venezuelan Tonka Bean with it's sweetness and bitterness paired by Dior perfumer Francois Demachy with Madagascan Vanilla, praline, and caramel to create a sensual delight for the senses. Launched in May 2015, this new addition to the La Collection Privée Christian Dior fragrance series is available from Dior.com.

"Woven around a Venezuelan Tonka Bean Absolute, this composition by Dior Perfumer-Creator Francois Demachy literally ravishes the senses. Drawn by the "immediate seduction" of this ingredient, François Demachy wanted to create a personalized representation of the Tonka Bean. An exercise in composition that plays on contrasts by celebrating both its sweetness and its delectable touch of bitterness. The warm and slightly smoky notes of Madagascan Vanilla were combined with the Tonka Bean to complete the evocative sensation of delight..." --dior.com

I wanted to compose a fragrance that would be a personalized representation of the Tonka Bean and celebrate the duality between its sweetness and its surprising touch of bitterness. This avid appeal and love of harmony naturally espouse the Dior spirit.

Beauty Spaces: Huda Kattan
Into the nucleus of the beauty mogul's American business: a palatial Beverly Hills powder room befitting the Queen of Makeup, with rituals imported from her home of Dubai.

"In the States, nobody uses fragrance at night. When I moved to the Middle East, my sister was like, 'No, perfume is for nighttime,' I use a vanilla scent - Kayali Vanilla or Dior Feve Delicieuse - on my skin and my pajamas. It's such a nice little treat, just for myself."
-- Huda Kattan 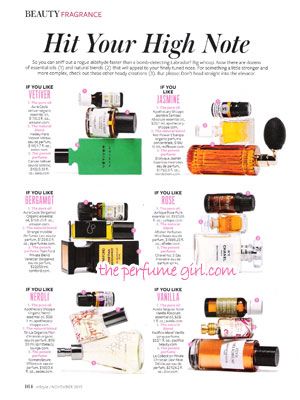 Sense & Sensitivities
There are dozens of essential oils and natural blends that will appeal to your finely tuned nose. For something a little stronger and more complex, check out the heady creations. 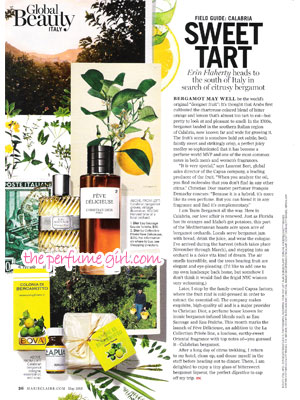 Field Guide: Calabria - Sweet Tart
Erin Flaherty heads to the south of Italy in search of citrusy bergamot. Bergamot may well be the world's original "designer fruit": It's thought that Arabs first cultivated the chartreuse-colored blend of bitter orange and lemon that's almost too tart to eat - but pretty to look at and pleasant to smell. In the 1700s, bergamot landed in the southern Italian region of Calabria, now known far and wide for growing it. The fruit's scent is somehow bold yet subtle, both faintly sweet and strikingly crisp, a perfect juicy medley so sophisticated that it had become a perfume world MVP and one of the most common notes in both men's and women's fragrances. ...Here in Calabria, our love affair is renewed. Just as Florida has its oranges... this part of the Mediterranean boasts acre upon acre of bergamot orchards. ...I stop by the family owned Capua factory, where the fruit rind is cold-pressed in order to extract the essential oil. The company makes exquisite, high-quality oil and is a major provider to Christian Dior, a perfume house known for iconic bergamot-infused blends such as Eau Sauvage and Eau Fraiche. This month marks the launch of Feve Delicieuse, an addition to the La Collection Privee line, a luscious, earthy-sweet Oriental fragrance with top notes of - you guessed it - Calabrian bergamot.... Dior Eau Sauvage Eau de Toilette, 65. Dior La Collection Privee Feve Delicieuse, $210. dior.com


View all Dior perfumes and fragrances