DAHLIA NOIR - The fragrance, a fantasized flower
The Dahlia is a flower without a scent. Dahlia Noir is an allegory of this flower, a mysterious and imaginary fragrance. François Demachy, composer of olfactory creations, followed Riccardo Tisci in his imagination, at times inspired by his family history, to bring to life this fantasy fragrance. Memories became sensations, then sensations became notes, and the notes have been blended into an unforgettable fragrance. In perfumery, as in Haute Couture, Riccardo Tisci weaves a bond between traditional softness ( the powdery notes) and his resolutely modern universe, transcribed here by woody notes. To this olfactory base, mystical notes such as Sandalwood and Tonka bean are added, then harmonized with rose, iris and mimosa, creating a perfect flower, a flower fatal; From its enveloping warmth to its floral wake, Dahlia Noir is steeped in emotion and redefines the imagination of Riccardo Tisci. It is a carnal fragrance: Dahlia Noir claims the skin and calls out to be touched.

Dahlia Noir, a timeless bottle
Simplicity marks the essence of a vision. Because to be heard you don't always need to shout, Riccardo Tisci has chosen a clean cut, structured and simple bottle for Dahlia Noir. Because minimalism is, after all, the ultimate luxury. Exquisite, with its heavy glass embellished by black lacquer and silver, it is solid yet delicate, elegant yet modest. Its well-structured shape recalls the 1950s, the golden age of perfumery. And the fragrance itself is, of course, the key to the mystery. Tinted with a sensual and carnal flesh-pink color, it is elegant and eternal. But there are always secrets to be uncovered... Remove the cap to reveal the DAHLIA NOIR engraved on a metal plate inside, celebrating its permanence with distinction.

Givenchy Dahlia Noir Eau de Parfum
This is the first fragrance created under Givenchy's fashion house, Riccardo Tisci. Dahlia Noir is a fantasy flower representing the femme fatale allure of the Givenchy woman. The fragrance combines beautiful classic notes like rose and patchouli with chypre for strength. The bottle emanates the fragrance's chicness with a simple inscription of "Dahlia Noir" hidden underneath the cap. Think of it as your little secret.

Best of Beauty - Fragrance
Thousands of beauty products were launched last year, joining the tens of thousands of jars, bottles, and tubes already on the shelves. Overwhelmed? Don't be. These...are all you need to know -- and own.

Floral Fragrance
Some florals shove their bouquets in your face. Not Givenchy Dahlia Noir. Named for a flower with no smell, it's a mix of rose and iris.

Snag the season's best-smelling spritzes for your own stash, or gift them to those who helped make your year amazing.
Spicy Bouquet - Rose smells way more exotic with shots of pepper and patchouli. Givenchy Dahlia Noir, $90.
("Beauty Loot." Cosmopolitan Dec. 2011: 94.) 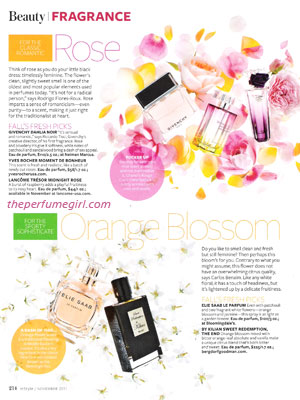 Rose - Think of rose as you do your little black dress: timelessly feminine. The flower's clean, slightly sweet smell is one of the oldest and most popular elements used in perfumes history. "It's not for a radical person," says Rodrigo Flores-Roux. Rose imparts a sense of romanticism -- even purity -- to a scent, making it just right for the traditionalist at heart. Givenchy Dahlia Noir. "It's sensual and romantic," says Riccardo Tisci, Givenchy's creative director, of his first fragrance. Rose and powdery iris give it softness, while notes of patchouli and sandalwood bring a dash of sex appeal. Eau de parfum, $110/2.5 oz.; at Neiman Marcus.
("Fragrance: Your Perfect Floral Fragrance." InStyle Nov. 2011: 214.)

Ladie's Man - When a man has eight sisters, he has to figure out what women want. In addition to designing clothing and handbags, Givenchy creative director Riccardo Tisci recently came out with his first fragrance, Dahlia Noir. He makes the connection between fashion and scent. [ Q&A ] Whose opinion did you seek when you were working on the scent? "I sent it to my mother and my sisters: my nine warriors. My mother is 83 and she loved it, but she wanted the bottle to be shaped like a flower." You went a different direction. "I wanted the bottle to be sharp, chic, graphic -- to be a beautiful object in a bathroom." What kind of woman would wear it? "She's elegant, severe, aggressive, confident, sensual, romantic. She can wear it all times of the day, but especially at night when she's making love -- I'm a nighttime designer." Why is fragrance important? "Whether people are poor or wealthy, fragrance makes them happy. It brings out the style inside them." Is creating a fragrance like designing clothes? "Perfume for me is like couture, because in a drop you have many molecules, which is so many hours of work."
(Muir, Heather. "Insider's Guide." Allure Nov. 2011: 85.)

Black Magic - With the fashion world atwitter about a certain job opening, Riccardo Tisci is keeping busy at the house of Givenchy, mixing up a scent as intoxicating as his muse Mariacarla Boscono. Mariacarla Boscono has a heart-shaped face, wide-set eyes, and a tiny chin -- features so ethereal and elfin, one wouldn't be surprised to find that her ears are pointed. When he first spotted this face in 1997, Riccardo Tisci knew instantly that he had found the fleshly embodiment of his future work; Boscono was his message to the fashion world, personified. "She's super romantic, beautiful -- but at the same time intellegent looking, so it's not a perfection beauty. It's sharp, and [she has a] darkness, which is my style," Tisci says. ... Who else, then, would Tisci choose to represent his latest endeavor, his inaugural fragrance for the house of Givenchy, Dahlia Noir? Givenchy has a host of profitable fragrances, including 2003's Very Irresistible and 2009's Ange ou Démon le Secret (fronted, respectively, by Liv Tyler and Uma Thurman). However, Dahlia Noir is the first one created with the input of the house's head designer since 1957, when M de Givenchy simultaneously launched Le De (its moniker referenced the designer's own aristocratic name) and, in honor of his muse Audrey Hepburn, the rose oriental L'Interdit. ... Dahlia Noir's plush-petaled inspiration is a scentless bloom; its name was borrowed from the 1987 James Ellroy novel based on the real-life 1947 murder of Hollywood hopeful Elizabeth Short, aka the Black Dahlia. The scent is a floral chypre featuring notes plumbed from Tisci's own memory -- in particular the rose, which reminds him of his mother and sisters -- plus iris, mimosa, and a rich base of sandalwood and patchouli. It marries Givenchy past and present: an old-fashioned floral slashed with an utterly suggestive undercurrent of nude skin. "The first note is very sharp," says Tisci approvingly, "and then the evaporation of the skin makes it more powdery, more romantic, which is really what I want. My woman, she is very sharp, but sometimes she's got a romantic side." ... Tisci has had ample cause for insomnia of late, as speculation intensifies that he could be appointed the new head designer at Dior, a post vacated by John Galliano in March. "It is nice to have a lot of people support me, a lot of people mention my name, because it means that what I'm doing, people appreciate it," he says before attempting -- unsuccessfully -- to put the rumors to rest. "The sure thing is that I'm staying with Givenchy...I'm staying, I'm staying."
(Bullock, Maggie. "Beauty Insider: Black Magin." Elle Oct. 2011: 290-292.)

Givenchy - "Perfume for me is the strawberry on the cake, a celebration of the past six years of success at the house." -Riccardo Tisci. "Perfume is like couture - it's different on every woman's skin," says designer Riccardo Tisci, who ventures into women's fragrance this fall with a woody-powdery rose blend called Dahlia Noir. No stranger to the female psyche, Tisci grew up in southern Italy, raised by his mother and eight sisters. "They were all his muses," chimes model Mariacarla Boscono, who now holds that title herself. Each muse had her part in shaping Tisci's debut scent: The central rose note was chosen for his mother, who wears a classic rose splash from Santa Maria Novella; the sisters had veto rights on the 200-plus versions of the perfume; and Boscono's gothic beauty inspired the dark visual concept. So, was designing a scent more challenging than, say, a fashion collection? Certainly different, says Tisci: "You have only one drop to express your romanticism, your edge." Givenchy Dahlia Noir Body Milk, $50; Eau de Parfum, $90; Candle, $56.
(Flaherty, Erin and Chu, Ying. "Beauty: In the Mood for All." Marie Claire Sept. 2011: 290.)

Scent & Style - "What fashion has taught me: You don't always have to be shocked to be chic." So says Givenchy's Riccardo Tisci, the man who brought us graphic Rorschach florals with an urban edge for resort, a jaw-droppingly pretty all-white couture, and fierce golden-eyed panther prints for fall. Tisci is lounging on acres of Ultra-suede in a suite at the Mercer hotel in SoHo, the terrace doors thrown open to the sunshine and light breeze. He is very thoughtfully talking about his first foray into fragrance, invoking the grand master, Hubert de Givenchy, more than once. "Even though I can be futuristic, I love traditions," he reflects. "That was the most important thing for me: classicism. And that shocked everybody at Givenchy." As did Dahlia Noir, the fruit of two years of his labor, a fragrance named for a flower that has no smell. An odd choice for a perfume, except if you are Riccardo Tisci. "It gave it a sense of purity, possibility," he says of the scent that ended up a sexy floral chypre. "The dahlia has a sense of freedom as a flower, but it still has romance and sharpness -- which is my style." -- Fleur Fatale: For Dahlia Noir, Riccardo Tisci was inspired by best friend Mariacarla Boscono, and Dahlias -- flowers with no scent.
(Brown, Sarah. "Beauty - Fragrance: Scent & Style." Vogue Sept. 2011:606-612.)