Premiere by Gucci - "Inspired by timeless Hollywood glamour, it is an invitation to embrace one's own red carpet moment." --gucci.com

Get the Look That's Rich
From decadent fragrance to party-ready glitz, these new holiday treats are really our sort. 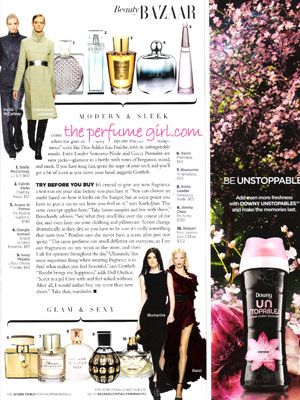 Find Your Perfect Scent
Perfume experts, designers, and fashion-savvy women reveal the secrets to discovering the fragrances that suit your style.

Glam & Sexy
...if your style is sexy and glamorous, you're in luck, as this fall's range of seductive scents is spectacular. For that backless gown, you need an aura that is mysterious and sensuous, so consider orientals. Estée Lauder Sensuous Nude and Gucci Première are new picks -- glamour in a bottle, with notes of bergamot, wood, and musk. If you have long hair, spritz the nape of your neck and you'll get a bit of scent as you move your head, suggests [perfumer, Ann] Gottlieb.

Bottle Service - Gucci Première ($105, saks.com)
[Blake] Lively is the face of the new Gucci fragrance, Premiere. "Gucci Premiere is about who you aspire to be. I feel like I'm displaced in time. I always say, 'I wish we could still go to the grocery store with white gloves and a box hat.' That's what's fun about this fragrance -- it's old-Hollywood glamour and elegance," she says. "When I think of Gucci, I see that strong, stoic equestrian woman. She's in charge, almost masculine. That's also what I love in fashion and what I hope to be as a woman: somebody who has the strength of a man, but the sensuality of a woman. The fragrance has wood, it's got leather, but it's also got this flowery, citrusy smell that lightens it."
(Hauser, Brooke. "Cover Look: Blake Lively." Allure Oct. 2012: 58)

Golden Girl - Blake Lively
She dates the A-list, she doesn't work out, and she has the best hair on TV. Don't hate her because she's Blake Lively.

Lively has been a model in ads for Chanel, become the face of the new fragrance Gucci Premiere ("I was like, 'Wow, I actually get to promote a smell that I really could love' -- I tried to take the bottle from the shoot, but they wouldn't let me because it was just a prototype."), and taken Hollywood by surprise, if not yet by storm -- Gossip Girl, entering its sixth and final season.
(Hauser, Brooke. "Golden Girl: Blake Lively." Allure Oct. 2012: 284)

Scent and Sensibility - Blake Lively
Blake Lively channels old-fashioned Hollywood glamour as the radiant face of Gucci's new fragrance. ...she is most exited to talk about ...is Gucci Premiere, the fashion house's newest perfume and the first fragrance for which Lively is the face and muse. "When they approached me, it was completely flooring and exciting and humbling because not only is it working with someone who I'm such a fan of," she says of Gucci designer Frida Giannini, "but it's the fragrance that represents old-Hollywood glamour." ... With more than 100 scents in her own personal collection, she describes Gucci Premiere with the authority of a fragrance fanatic: "It has that balance between the citrus and the floral, but it also has wood and leather smells, which gives it that masculinity and makes it very Gucci."