Wonderstruck by Taylor Swift - "Just like her creative approach to songwriting, every element is authentic, embracing all that is special about Taylor. Wonderstruck is an awe-inspiring feeling. It could be a connection with someone or a rush you get when you experience something magical. Wonderstruck is also a lyric in the song "Enchanted" on Taylor's album, Speak Now. In this fragrance, a charming and sparkling surprise of vibrant fruits kisses a bouquet of soft petals and a touch of sweet indulgence."  --taylorswift.com

Wonderstuck by Taylor Swift
Wonderstruck is that awe-inspiring feeling that comes from experiencing something magical. Eclectic and traditional with a whimsical flair, every element of the brand is authentically Taylor. A charming and sparkling surprise of vibrant fruits, kissed by a bouquet of soft petals and a touch of sweet indulgence.
Source: shop.elizabetharden.com (Sept. 2011) 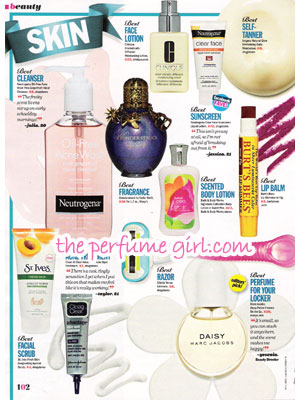 The Besties
The votes are in! Thousands of readers (and Seventeen's beauty editors!) are obsessed with these products. Here's why you'll fall in love with them, too.

Best Perfume for Your Locker
Marc Jacobs Daisy Petite Flowers on the Go, $59, macys.com.
"It's small, so you can stash it anywhere, and the scent makes me happe." --Yesenia, Beauty Director 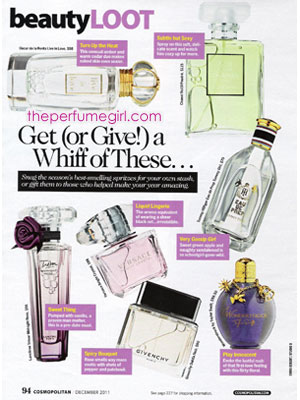 Snag the season's best-smelling spritzes for your own stash, or gift them to those who helped make your year amazing.
Play Innocent - Evoke the lustful rush of that first-love feeling with this flirty floral. Wonderstruck by Taylor Swift, $59.50.
("Beauty Loot." Cosmopolitan Dec. 2011: 94.)

Taylor Swift's Charm School - The signer may be notoriously coy about the meaning of her lyrics (ahem, John Mayer), but when it comes to the bottle for her first fragrance, Wonderstruck -- a sweet honeysuckle scent -- Swift is happy to reveal all. [Charms on perfume bottle, Star charm:] "This I called a Moravian Star. I have similar pendants hanging in the T-Party, the room where I hang out with fans after concerts." [Dove charm:] "There is something so beautiful and graceful about Doves." [Birdcage charm:] "My home is decorated with antique Birdcages. I added this charm to give the bottle a vintage feel." [Perfume bottle cap:] "If you look closely, you'll see my Lucky Number hidden on the cap. Whenever a 13 pops up, it's a good thing!" [Perfume bottle lettering:] "The lyric 'I'm Wonderstruck, blushing all the way home' comes from my song 'Enchanted.'" Wonderstruck by Taylor Swift eau de parfum, $60/3.4 oz.; sephora.com.
("What's Now! Taylor Swift's Charm School." InStyle Nov. 2011: 74.) 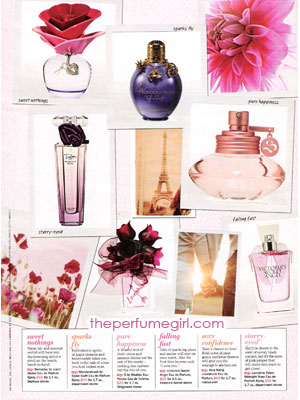 Sparks Fly - Each electric spritz of apple blossom and honeysuckle takes you back to the rush of when you first locked eyes. Wonderstruck by Taylor Swift Eau de Parfum Spray, $50 for 1.7 oz., department stores.
(Gray, Meredith. "Love is in the Air." Seventeen Nov. 2011: 143)

Taylor Swift - The 21-year-old Grammy winner doesn't use any product on those bodacious blond curls. And she has loads of other secrets strategies, too! Have a fragrance you love: "I love vanilla, the warmth of it. I also love the berries in my new fragrance." Her apartment inspired her dressing room and her perfume: "I keep buying birdcages! I have a gigantic human-size one." Her new scent, Wonderstruck by Taylor Swift eau de parfum spray ($60 for 3.4 oz., dillards.com).
(Kallor, Amber. "10 Beauty Tricks from Taylor Swift." Glamour Oct. 2011: 155.)