Fragrances Around the World

Fragrances Around the World

From Latin America to Australia, China to Ethiopia, fashion and beauty experts around the world discuss their personal fragrances.

Excerpts from a fragrance editorial, The Culture of Fragrance, in Allure Magazine, June 2016 issue.

The Culture of Fragrance

Take note: When someone insists that a perfume has universal appeal, they are selling you a line. And probably a perfume. The truth is our scent preferences are too emotionally charged and deeply rooted to win favor across the board. And that is exactly what gives perfume its mystique. When we interviewed fashion and beauty experts from around the world, we discovered that fragrance is pretty heady stuff, with potent connections to spirituality, geography, and history (personal and otherwise). For some women, perfume represents a leap toward independence and prosperity. For others, it's a link to simpler, more peaceful times. The one connecting thread? Scent is a form of self-expression, no matter who's wearing it. What could be more beautiful, or honest, than that? -- Liana Schaffner, Allure Editor | Read the entire article @ Allure.com

"I live in London now, but I'm Australian, and I believe that's where my minimalist approach to fragrance comes from. I love the smell of the ocean on my skin, or just a dash of patchouli oil on the nape of my neck. Where I'm from in Australia, the air is so rich and heavily scented with gardenia that perfume can feel superfluous. I wear Hermès Eau Claire des Merveilles all year round. It's incredibly light and unassuming. I always get compliments on it, but people are never quite sure if it's my perfume or just my soap. It's that subtle."
--Candice Lake is an Australian-born, London-based fashion blogger, style editor, and photographer.

The much-obsessed-over scent of Oribe's hair products is heavy on la mariposa blanca, the national flower of Cuba, the hairstulist's home country.

"I come from a rich fragrance culture that leans toward lush, floral scents. The first one I remember smelling was agua de violetas - violet water. It was so fresh and light. My favorite floral scent today is iris, which has that same subtle quality. As I grew up, I started to experiment more and moved away from flowers toward clean, fresh, citrus scents. Perfume is still the sort of thing that a loved one will give to me, so I wear it with pride. I always apply perfume on the insides of my wrists and both sides of my neck."
--Genesis Rodriguez is an actress and a brand ambassador for L'Oréal Paris. She was born in Miami to a Cuban mother and a Venezuelan father.

"My only exposure to fragrance as a little girl was the laundry detergent my mom used, which had a vanilla scent. I first became interested in fragrance when I moved to Beijing and went to department stores for the first time. I realized then how scent can affect your mood and represent your personality. I think East Asian women in particular are developing a new interest in fragrance and using it as a way to express themselves. My favorite scents are citruses or light florals, like Jo Malone Red Roses. I layer it over a lotion, like Shiseido Replenishing Body Cream, so it lasts longer and has a little depth."
--Model Sui He is from Wenzhou, China. She's a face of Shiseido.

"Ethiopia has many tribes, with different languages and traditions. I think the one thing that we share absolutely in common is fragrance. Everyone in Ethiopia burns frankincense. I identify so strongly with it that I'm drawn to perfumes with woodsy, earthy notes. I love Tom Ford Sahara Noir. I have three bottles because I don't want to run out. [Editor's note: A wise move - the fragrance was recently discontinued.] When I travel to Ethiopia three times a year, I always bring frankincense home with me. But it's never enough."
--Maya Haile Samuelsson is a model from Ethiopia. She and her husband, chef Marcus Samuelsson, support entrepreneurial efforts in Ethiopia through their organization Three Goats.

"In Mexico, I feel like most women have a signature scent. I wear the same fresh, cool scent every day. When I was little, my mother used to splash lemon water on us, which she bought from a popular store in Mexico City called Sanborns. It definitely influenced what I wear today. I still apply splashy lemon cologne to the back of my neck whenever I get out of the shower. My favorite is called Regia, from a shop based in Barcelona. I always dab perfume on my wrist and then my neck - I learned this from my mother."
--Designer Karla Martinez de Salas worked as the accessories editor for Vogue and fashion market and accessories director at W before moving back home to Mexico City. She is the co-founder of Piamita, a high-end clothing line.

"I grew up in the last years of the Soviet Union, during a time of economic crisis. Fragrance was considered an extravagance, so I rarely saw fragrance bottles on my mother's or older sister's vanity. The first time I actually smelled a perfume, I was 14 years old. Around that time, Kenzo launched L'Eau par Kenzo, and it really took off in Russia. It was so light and splashy that I could wear it to school without my teacher noticing. To this day, I love sheer fragrances - I associate them with my childhood and the excitement of owning my very first perfume. This makes me a bit of an anomaly in Moscow, though, where women favor powerful, assertive perfumes. But Russian women are drawn to scents that evoke memories; we're very nostalgic. The most popular fragrance in Russia is Lancôme Climat; it appeared in a famous Soviet film, The Irony of Fate, or Enjoy Your Bath! In it, the main character gives a bottle of Climat as a New Year's present - in Russia, it's still a huge tradition to give people perfume at the new year. Fragrance is considered a wonderful gift in my country. And Russian men usually wear what women choose for them. I have it easy: My boyfriend and I wear the same scent, Comme des Garçons Incense Avignon. It's a Russian favorite because the subtle incense reminds us of the Orthodox Church."
--Ekaterina Danilova is the beauty director of Russian Allure. She lives and works in Moscow.

"When I was 12, my family moved from the U.S. back to Korea - a huge shift, not least of all in the attitudes toward fragrance. In America, I would walk onto the subway and immediately smell trendy fragrances, like Abercrombie. In Korea, people are far more reserved about scent. When you visit the flagship Olive Young store in Seoul (it's sort of like Korea's Sephora), you have to test perfume in a giant walk-in tube to prevent the particles from dispersing into the air. It's not that Koreans don't enjoy fragrance, but we see it as something more intimate, part of the bath regimen. When I wear perfume, I spray the teeniest bit on my left wrist, then use it to dab my other wrist and collarbone. I adore Dolce & Gabbana The One, but if I accidentally apply too much, I can almost hear my mother saying, 'Oh, I have a headache.'"
--Alicia Yoon is the founder and CEO of Peach & Lily, an e-commerce site that sells beauty products from Korea and Japan. She splits her time between Seoul and New York City.

When we think of the Middle Eastern scents, we often think of oud - the dark, resinous note that makes a fragrance instantly opulent. On the Arabian peninsula, it's so mainstream you'll find it in detergent.

"My mother is Mediterranean, but she was raised in Japan. My father is Lebanese. I was born in Canada but grew up in Paris and Beirut. So I can relate to several different cultures. In terms of fragrance, though, I identify most strongly with Lebanon. I think this has something to do with Lebanese food - it's so rich and diverse. It incorporates spices like cardamom and cinnamon, rose water, fruits, and pistachios. At the end of every meal, we drink orange-blossom tea, which we call "white coffee." It has a beautiful, uplifting scent that relaxes you all over. A meal is a multisensory experience in Lebanon; it broadens your appetite for complex aromas. Maybe food has something to do with why, in my experience, a lot of people in the Middle East embrace fragrance instead of tiptoeing around it. My company is based in Lebanon because soap actually originated in the Middle East 6,000 years ago. I think a solid soap has a wholesomeness that you can't duplicate with a quick spritz of perfume. When I combine the steam of a shower with the softness of lather and the scent of essential oils, it suspends time. My favorite soap is Senteurs d'Orient Orange Blossom. Maybe it's because of that orange-blossom tea, but for me, using it feels ritualistic, almost spiritual."
--Sarah Akkari is the CEO of Senteurs d'Orient USA, a Lebanon-based company that makes handcrafted bath products.

"My first fragrance memory is of my mother mixing cow fat with wild plants to give it an aromatic scent. Although we didn't have perfume where I come from, African women wear a lot of essential oils. I still use scented oils in my bath or apply them right after I step out of the shower. They form a base for everything else; I think they complement the natural scent of my skin instead of overpowering it. My favorite essential oils are lavender, sandalwood, eucalyptus, and anything that has the smell of wildflowers. Once I'm dressed, I dab a bit of perfume on my wrists. My favorite right now is Thierry Mugler Angel."
--Model Nykhor Paul fled her native South Sudan as a refugee and now brings awareness to the crisis there through her campaign, We Are Nilotic.

"Where I grew up in India, you weren't supposed to put fragrance on your skin because people said it would attract unwanted spirits. Because of that, my first clear memory of perfume was very recent - only four years ago. I smelled a perfume on someone for the first time and went absolutely crazy for it. After that, I became obsessed with fragrance. There are many scents that I enjoy, but I use only one on myself: Narciso Rodriguez For Her. I really think it expresses who I am - not too strong, not too light, soothing, but prominent."
--Bhumika Arora is from a small town in the state of Haryana, India. She is now a runway model, working at fashion shows in New York City, London, Milan, and Paris.

"India has some of the most beautiful and alarming smells," says Byredo perfumer Ben Gorham of his mother's native country. One of his standout (and Best of Beauty-winning) fragrances was inspired by his cousin's traditional Indian wedding. "The vision of the bride's head completely covered in flowers inspired me to create a floral scent," he says. "I had always stayed away from florals because I felt they may be preceived as too traditional." The resulting fragrance, Flowerhead, is anything but. A fantasy of rose, jasmine, amber, and splashy lemon, it's a perfect marriage of brightness and intensity.

Read the entire story at Allure.com 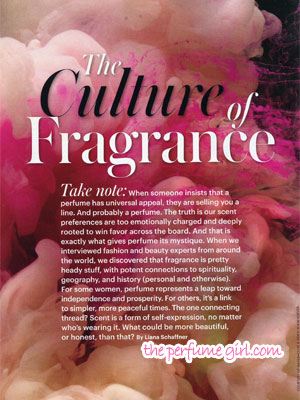 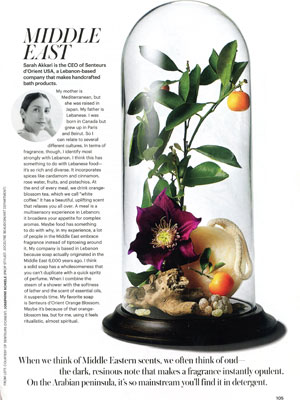 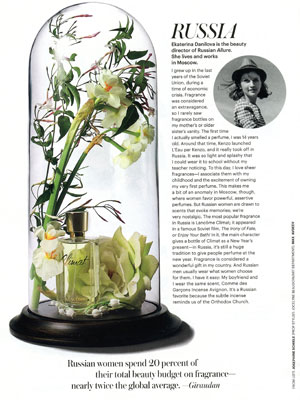 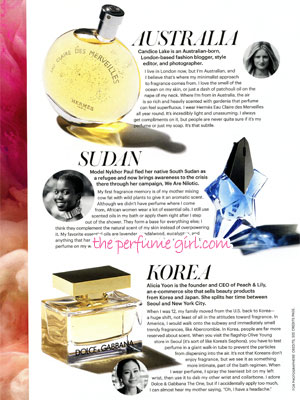 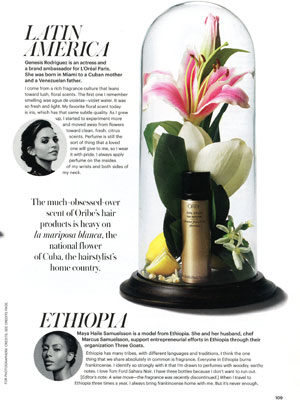 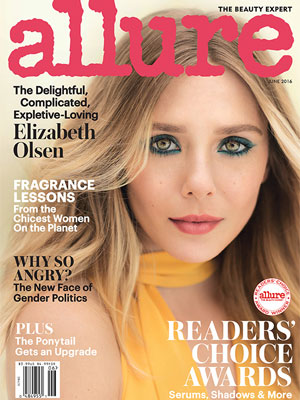