Aleksandr by Arquiste - "January, 1837, St. Petersburg, Russia. On a frosty winter afternoon, a fiery gentlemen finishes his toilette by dabbing on a preparation of Neroli and Violet. He draws down his cuffs, dons a heavy fur and strides out in polished leather boots. As he rides off on his sleigh, the woody scent of Fir fulls the air. Beyond the snow-laden trees, on a clearing bathed in amber light, the fateful duel awaits."  --arquiste.com

Alexander Pushkin, the Great Russian author, was married to a great beauty called Natalie. Among her admirers was George d'Anthes, a young French officer who greatly infuriated Pushkin. It was decided that the only possible outcome was the challenge of a duel. This proved fatal; wounded by d'Anthes, Pushkin perished two days later. 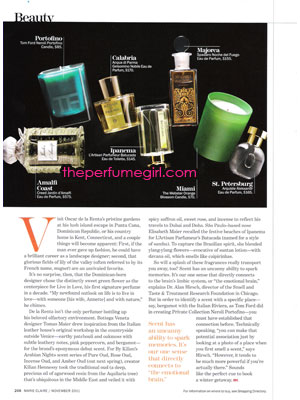 Notes from Abroad
Can you bottle up a beloved destingation? Take a trip to the far-flung locales that inspired these superb scents.

View all Arquiste perfumes and fragrances