Central Park South by Bond No. 9 - "Central Park South finally gets a sophisticated fragrance it can call its own. The world's most super-elegant city street, with the world's most sumptuous greenery at its doorstep, is the inspiration for Bond No. 9's new eau de parfum. A fresh floral - top notes of grapefruit flower and blackcurrant buds, a seductive heart-note of jasmine and lily of the valley, and a base of classic wood notes." --bondno9.com 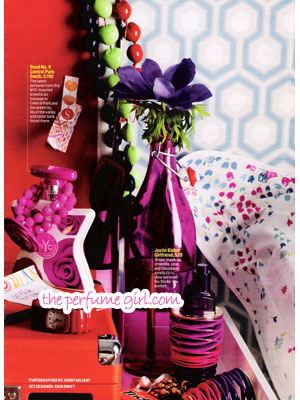 Bottle Service
How you display your fragrance wardrobe is just as important as what's in it. Here, match spring's freshest scents to your personality and style.

Trendy -- Neon and pop-art accents make these fragrances look as punchy and playful as they smell.


Bond No. 9 Central Park South
The latest perfume from this NYC-inspired brand is an homage to Central Park and the green ivy, lily of the valley, and cedar bark found there. ($190, bondno9.com)

First, we did Central Park. Next came Bryant Park, followed by Union Square, Washington Square, the High Line, and Madison Square Park. It's a well known fact that New York -- centric Bond No. 9 has fallen in love with the city's parks -- so much so that we've now got our largest and grandest urban oasis of all, Central Park, almost completely surrounded. While our Fifth Avenue scent celebrates the park's eastern edge, and Central Park West takes care of the western flank, our Spring 2013 eau de parfum, Central Park South, now surveys the southern end of the world's most celebrated rectangle of superbly landscaped greenery. After all, for us at Bond No. 9, the mile-and-a-third long landmarked Central Park is a constant source of inspiration, not only vis a vis the scents of the park itself -- but particularly in the way it's inspired both literal and figurative heights of greatness in its surroundings. Think of the magnificent cultural institutions dotting Fifth Avenue and Central Park West, and, along the southern rim, the rows of handsome cabs and extravaganza skyscraper palazzos, whose sumptuous views are the ultimate real-but-mirage-like lure of Central Park South.

Arriving on counter April 15th, Central Park South, the eau de parfum, captures the mesmerizing ambiance of this precious street of dreams that is lodged between Grand Army Plaza on the East Side and Columbus Circle on the West, and that simultaneously connects the most exquisite urban pleasures with the lure and profusion of nature harnessed - but nature nevertheless. A fresh floral, bursting with elegance, it starts out with tangy and tonic wakeup topnotes that sing of springtime: grapefruit flower, mingled with blackcurrent buds and green ivy leaves -- the kind that thrive on trees dotted around Central Park. Their crisp freshness soon segues into more seductive heart-notes: a bouquet of classic, mesmerizing jasmine and ylang ylang, vibrant jonquil, and honeyed lily of the valley -- the latter a familiar early spring bloom in Central Park. The base, designed to extend the heady but volatile scent, contains those classic wood notes, sandalwood and cedar bark - grown on Central Park's meadows, along with durable animal musk.

The Central Park South bottle echoes both scent and location. Superimposed on a pure white background are a scattering of vivid fuchsia blossoms -- not literal flowers, but crisp photos that are palpable reappearances of the very blossom on the detachable bracelet (whose blossom medallion converts to a brooch) gracing the neck of the bottle. This bottle is a meta-design: an object plus its rendering ... a fantasy play on the duality of illusion and reality. The luscious swirling blossom (previously rendered in pink on our Central Park West bottle and in green on Madison Square Park) is a stylized fantasy -- just as the eaux de parfum we create are fantasy versions of living flowers. And -- may we add? -- even the sumptuous abundance of Central Park itself is a form of manicured artifice, intended as respite and delight for the magnificent city it serves.

View all Bond No. 9 perfumes and fragrances