My First Shalimar by Guerlain - "An initiation into voluptuousness, sensuality, an initiation into SHALIMAR. It is the moment when it all begins, like the freshness of the first time, like a captivating new emotion. A luminous interpretation with ambery floral notes. The fresh burst of bergamot gives way to a delicate floral heart: an orchestrated overdose of rose, jasmine and iris. The vanilla and Tonka bean base instantly whets addiction, like the captivating feel of cashmere on bare skin." --guerlain.com

The Legend
The Myth - There was once...SHALIMAR 1921, Paris was stirred up by the roaring Twenties, fashion and art were touched by modernity.

The Perfumer - An artist at heart, Jacques Guerlain created a captivating trail of oriental notes. A first for Guerlain and for perfume in general.

India - A tribute to the Emperor Shah Jahan who was devoted to his beloved, Princess Mumtaz Mahal. This Indian romance transforms the fragrance into a legend.

The Accolade - The fragrance did not become famous over night. A stir ensued as news spread abroad the 'Normandie' liner that Madame Guerlain was wearing Shalimar. It quickly became the must-have fragrance.

The Bottle - An eternal legend was about to be born. The bottle was designed like a jewel. Adorned with a sapphire blue stopper, the bottle won 1st prize in the 1925 Exhibition of Decorative Arts.

The Reinvention - Natalia Vodianove, English rock heiress, Jade Jagger, and Louise Bourgeois have all helped to seal Shalimar's future as an eternal, timeless myth. The legend continues in 2011

The Bottle
The legendary SHALIMAR bottle, designed by Raymond Guerlain in 1925, has been reinterpreted. The fragrance has taken on a soft powdery pink colour. The blue-grey tassles, symbolic of Guerlain's expertise, seems to be delicately carried by a light breeze, like a feather.

The Film
Under the direction of Paolo Reversi, Natalia Vodianova reveals the pureness and grace of a new Eve. Her fragrance defines her and enshrouds her in sensuality. The muse would be naked without it. 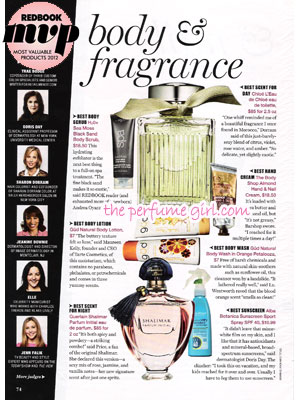 Redbook MVP 2012's Most Valuable Products
Add the winners are...

Body & Fragrance - Best Scent for Night
Guerlain Shalimar Parfum Initial eau de parfum, $85 for 2 oz.
"It's both spicy and pawdery -- a striking combo!" said Lisa Price (president and founder of Carol's daughter), a fan of the original Shalimar. She declared this version -- a sexy mix of rose, jasmine, and vanilla notes -- her new signature scent after just one spritz.

Modern / Classic
Spin-off fragrances are launched at a pace that rivals smartphone releases, which makes it all the more shocking that Guerlain's Shalimar hasn't been significantly altered for more than 85 years. Perfumer Thierry Wasser, at the request of his 17-year-old niece, fiddled with the iconic blend to create the younger, less-in-your-face Shalimar Parfum Initial. Wasser explains his formula. The Starting Point: A dark, velvety oriental with notes of lemon, bergamot, jasmine, rose, iris, vanilla, tonka bean, and incense. He Subtracted: The "intimidating leathery scent" of ciste labdanum, and he toned down the intense jasmine. He Added: Even more of the powdery iris and rose, plus a caramel base note. He Revised: The bottle, making it taller and leaner and tinting the juice pink. The Result: A lighter, cheerier, and -- dare we say it -- more accessible take on the classic fragrance.
(DeMaio, Krista Bennett. "Beauty Reporter." Allure Nov. 2011: 56)

Love Drug
Eighty-six years ago, Jacques Guerlain compared his Shalimar to an "outrageously low-cut dress" for its power to seduce. The new Shalimar Parfum Initial stays sensual with vanilla, Italian iris, and rose.