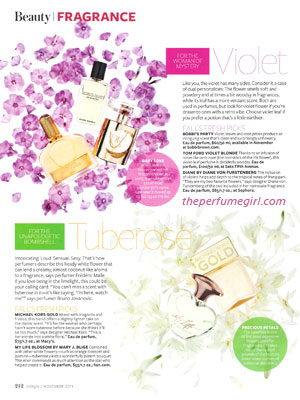 Tuberose - Intoxicating. Loud. Sensual. Sexy. That's how perfumers describe this heady white flower that can lend a creamy, almost coconut-like aroma to a fragrance, says perfumer Frederic Malle. If you love being in the limelight, this could be your calling card. "You can't miss a scent with tuberose in it -- it's like saying, 'I'm here, watch me!'" says perfumer Bruno Jovanovic. Michael Kors Gold. Mixed with magnolia and freesia, this blend offers a slightly lighter take on the classic scent. "It's for the woman who perhaps hasn't worn tuberose before because she thinks it'll be too much," says designer Michael Kors. "This is her entrée into a white floral." Eau de parfum, $75/1.7 oz.; at Macy's.
("Fragrance: Your Perfect Floral Fragrance." InStyle Nov. 2011: 212.)

Scents of Style - Glam Like Michael Kors: A burst of luxe tuberose, magnolia, and freesia makes you feel like a movie star all the time - even when you're lounging in sweats. Try: Michael Kors Gold Eau de Parfum, $75 for 1.7 oz., department stores.
(Gray, Meredith. "Beauty: Scents of Style." Seventeen Sept. 2011: 136.)

Gold Rush - This season, Michael Kors was the golden boy of New York Fashion Week. Besides celebrating his 30th anniversary in the biz with a dazzling greatest-hits collection, he also previewed another creation: a shiny spin on his original tuberose-based fragrance called, simply, Gold. "We thought of this woman sitting in an office at her desk and how she could add a little glamour to her day," Kors told us backstage. "How do you do that in fragrance form? So we took a classic and put in a little extra sparkle." Michael Kors Gold Eau de Parfum, $75.
(Flaherty, Erin. "101 Ideas: Beauty Moment." Marie Claire Sept. 2011: 168.)

Scent & Style - Take Michael Kors, For Gold, he has done his best to bottle "unselfconscious glamour" -- which roughly translates to tuberose, magnolia, orange blossom, and a healthy dose of musk. "What I wanted was something indulgent and glamorous, but sporty at the same time. 'Cause that's who we are," he deadpans from his Bryant Park office, mirrored silver aviators folded neatly on the table within arm's reach. He chose Karmen Pedaru (a former soccer star in Estonia) as his muse because "she is truly one of those girls who could be on a surfboard at 5:00PM and on a red carpet an hour later." The name, Gold, seems a natural fit, connoting easy extravagance (Kor's zillion-ply cashmeres come to mind), as well as the army of bronzed-to-the-ghilt beauties who regularly walk his runways. But he had something else in mind. "I was thinking of it as the golden hour. I always say, 'You want to take my picture? Call me at 5:30. Give me the golden hour.'" -- The Golden Hour: Michael Kors Gold.
(Brown, Sarah. "Beauty - Fragrance: Scent & Style." Vogue Sept. 2011:606-612.)