Prada Les Infusions by Prada - A collection of fragrances each representing a single fragrance note. Created by perfumer Daniela Andrier, the six unisex perfumes include the original 2007 Infusion d'Iris, reissued 2009 Infusion de Fleur d'Oranger, reissued 2010 Infusion de Vetiver, along with three new scents, Infusion d'Iris Cedre, Infusion d'Amande, and Infusion d'Oeillet. Each fragrance is housed in the classic vintage-style Infusion bottle with the 1913 Prada heritage crest label. A colored film is added to the bottom of each bottle giving each scent its own unique color, with matching colored cap. Launched in June 2015, the eau de parfum sprays are available in the U.S. in early 2016.

"Resisting feminine and masculine stereotypes and looking beyond current perfume trends, Les Infusions de Prada are the culmination of a reverence for the past, an understanding of our place in the present and the fowardlooking point of view of Prada. They embody the gracefull weave of apparent contradictions at the heart of Prada: heritage moulded to modernity, poetry meeting precision, instinct alongside intellect, subtetly together with power, sensuality emphasized by freshness. An infusion is a trasformative encounter from which the unexpected emerges, the new and the familiar." --prada.com 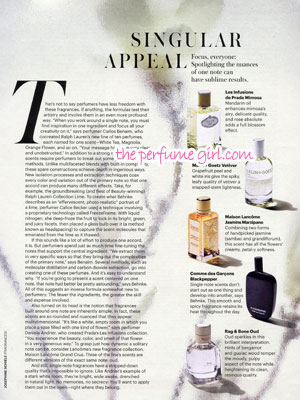 Singular Sensations
Our favorite new scents are built around a single note. If perfumes are cocktails, the best ones right now are served straight up: Intoxicating celebrations of a single note. Pick your poison.

Our favorite new fragrances emphasize one thing. And it's not one emotion or one aspiration or one vacation destination - it's one ingredient.

Also turned on its head is the notion that fragrances built around one note are inherently simple. In fact, these scents are so rounded and nuanced that they appear multidimensional. "It's like a white, empty room in which you place a vase filled with one kind of flower," says perfumer Daniela Andrier, who created Prada's Les Infusions collection. "You experience the beauty, color, and smell of that flower in a very generous way." To grasp just how dynamic a solitary note can be, consider Lancome's new fragrance collection, Maison Lancôme Grand Crus. Three of the line's scents are different versions of the exact same note: oud. And still, single-note fragrances have a stripped-down quality that's impossible to ignore. Like Andrier's example of a stark white room, they're bright, wide awake, drenched in natural light. 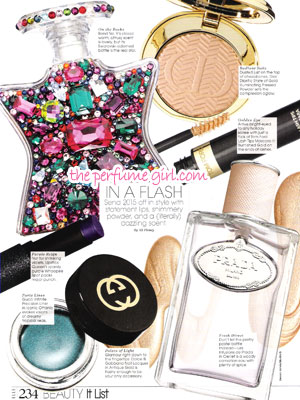 Beauty It List
In A Flash - Send 2015 off in style with statement lips, shimmery powder, and a (literally) dazzling scent.

On the Rocks
BOND NO. 9's classic warm, citrusy scent is lovely, but its Swarovski-adorned bottle is the real star.

View all Prada perfumes and fragrances