Diane by Diane von Furstenberg - "Close to the skin, fluid, and enveloping. Created for all and unique for everyone, Diane's fragrance is built up like one of her dresses: it wraps up a woman's body and stays with her all day long. Be the woman you want to be. Fresh and sensual, DIANE the fragrance is a bold mix of soft Frangipani flower and mischievous Violet, all balanced with a sexy twist of myrrh, musk and patchouli. Feminine, powerful, and seductive, DIANE is the ultimate accessory." --dvf.com 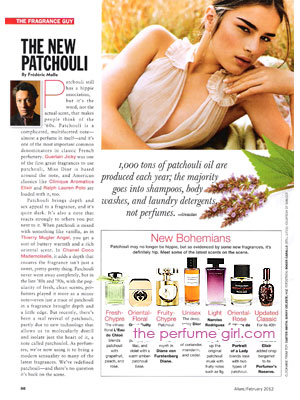 Violet - Like you, the violet has many sides. Consider it a case of dual personalities. The flower smells soft and powdery and at times a bit woodsy in fragrances, while its leaf has a more verdant scent. Both are used in perfumes, but look for violet flower if you're drawn to ones with a retro vibe. Choose violet leaf if you prefer a potion that's a little earthier. Diane by Diane von Furstenberg. This inclusion of violets helps add depth to the tropical notes of frangipani. "They are my two favorite flowers," says designer Diane von Furstenberg of the two included in her namesake perfume.
("Fragrance: Your Perfect Floral Fragrance." InStyle Nov. 2011: 212.) 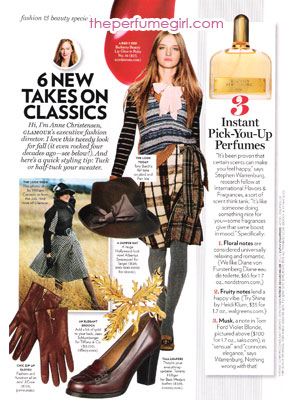 Floral Notes
"It's been proven that certain scents can make you feel happy," says Stephen Warrenburg, research fellow at International Flavors & Fragrances, a sort of scent think tank. "It's like someone doing something nice for you -- some fragrances give that same boost in mood." Specifically...Floral notes are considered universally relaxing and romantic. (We like Diane von Furstenberg Diane eau de toilette, $65 for 1.7 oz., nordstrom.com). 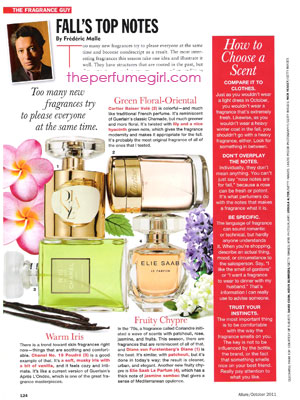 Fruity Chypre
In the '70s, a fragrance called Coriandre [by Jean Couturier] initiated a wave of scents with patchouli, rose, jasmine, and fruits. This season, there are fragrances that are reminiscent of all of that, and Diane von Furstenberg's Diane is the best. It's similar, with patchouli, but it's done in today's way; the result is cleaner, urban, and elegant. 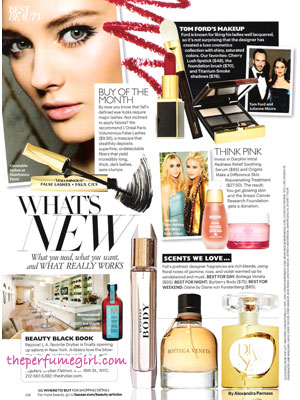 Scents We Love
Fall's prettiest designer fragrances are rich in blends, using floral nots of jasmine, rose, and violet warmed up by sandalwood and musk.

Daring Diane - Diane von Furstenberg certainly understands the power of understated seduction. In 1974, her wrap dress gave entirely new meaning to the term "Dress for success." Now, as an iconic businesswoman and the president of the Council of Fashion Designers of America, she's set out to do nothing less than bring back the magic of fragrance - with the quietly seductive Diane. An intriguing blend of sexy fragipani and demure woodsy-green violet and patchouli, the scent represents the yin and the yang that is a Furstenberg woman: powerfully seductive without being aggressive. Available in September at Nordstrom and Bloomingdale's. (bloomingdales.com)
(Strand, Olivia. "FanFair: Beauty." Vanity Fair Sept. 2011: 172.)

Scent & Style - The fabulous thing about Diane von Furstenberg is that she designs for herself, and she's proud of it. "I have put everything into this perfume," she says of her self-titled new scent. "It's my first name. It's as personal as I can possibly make it." But, of course, it's not just for her -- like the wrap dress, she hopes it will embolden a new generation: "Lately, I think younger girls just don't appreciate the power of perfume and what it does," she laments. "Perfume is a weapon for women, and it has been one since antiquity!" The scent is ripe with DVF's favorite flowers: frangipani, which she first spotted on a trip to Bali ("It grows on an ugly tree, this beautiful flower"), and violet, "a tiny plant that grows most of the time in the woods, and normally you step on it. But it's mischievous." -- Linked In: Diane von Furstenberg looked to H.Stern's sulta bracelet -- the signature accessory she is rarely seem without -- for the design of Diane.
(Brown, Sarah. "Beauty - Fragrance: Scent & Style." Vogue Sept. 2011: 606-612.)