Dries Van Noten by Frederic Malle - (Dries Van Noten is a Belgian fashion designer) "A perfume built around natural sandalwood, chosen for its softness and its character, and the fact that it is simultaneously exotic and evocative of the tradition of great classic perfumes. This very short formula made of very precious materials, generates a sober but distinct sensuality. It is, in my eyes, a fair parallel to Dries van Noten's world." --fredericmalle.com 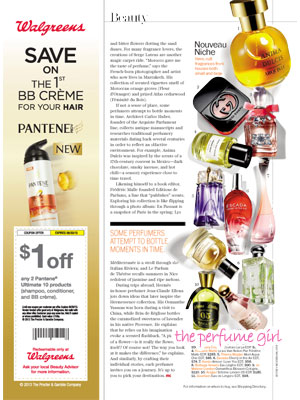 Making Scents of a Man
When Frederic Malle developed a unisex fragrance as an "olfactory portrait" of pal and fashion rock star Dries Van Noten, he looked at "not only Dries's designs but where he lives, what he eats, how he relates to women," says the perfumer. The result? Eau so chic!

Sandalwood -- For the cornerstone note in the fragrance, Malle turned to sandalwood from India. "It's exotic, like some of the embroidery and detail in Dries's clothing."
Jasmine -- "I wanted to create something that was as warm and inviting as Dries's life," says Malle. The subdued notes of the white flower "softened the blend, making it more comfortable to wear."
Lemon -- To give the scent more pop, Malle used a classic perfumery combo: lemon and bergamot. "It's very Dries, in that he uses traditional materials, like velvet, in his modern designs."
Vanilla -- "Dries lives in Antwerp, where there are so many wonderful desserts, like waffles," says Malle. Vanilla sweetens this blend like it does that toasty Belgian treat.

Bottle Service
How you display your fragrance wardrobe is just as important as what's in it. Here, match spring's freshest scents to your personality and style.

My Stuff - Frederic Malle
Frédéric Malle's eclectic and imaginative taste in fragrance has placed him in the pantheon of renowned luxury perfumers. This month, he launches a new collection of scents -- each is evocative of the world inhabited by a person he admires. The first is Dries Van Noten par Frederic Malle.