Sì by Giorgio Armani - Giorgio Armani Si fragrance. This modern chypre perfume for women is a delicate and sophisticated feminine scent. With notes of blackcurrant nectar, airy florals, and musky blond woods this new mysterious and seductive perfume leaves a lingering trail. The fragrance campaign features actress Cate Blanchett, while the packaging takes on a simple and elegant peach and black color scheme.

Giorgio Armani Si - "Experience Si, the new fragrance by Giorgio Armani. This luminous fragrance has been created for the modern woman who's strong yet feminine, sophisticated yet charismatic. She embodies the very essence of chic Italian elegance and style. She says YES to life!. Si Eau de Parfum is a modern chypre, reinvented with deep blackcurrant nectar, airy florals and musky blond wood. The scent is at first delicate, then lingers with mystery and later makes you remember her." --giorgioarmanibeauty-usa.com 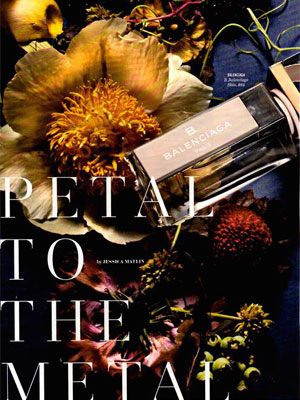 Petal to the Metal
Ladylike is overrated -- This fall, floral fragrances are all about the edge.

The New Femininity
When Armani Si debuted in the U.S. last year (it was already a hit in Eaurope), it was the antithesis of frou frou. With its retangular shape, stonelike cap, and woody-floral composition. ... While Si has floral notes (freesia and rose...), it's described as a modern chypre - chypre being the fragrance family built on woody, mossy notes. Within a year, Si has become Giorgio Armani's best-selling women's fragrance to date in the U.S. 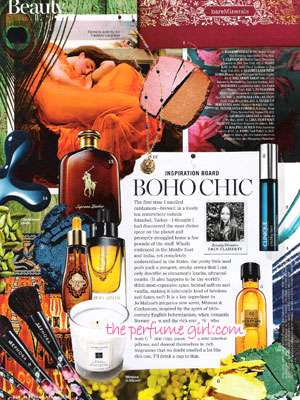 Boho Chic
Cardamom - Wholly embraced in the Middle East and India, yet completely underutilized in the States, the pretty little seed pods pack a pungent, smoky aroma that I can only described as cinnamon's louche, ultracool cousin.