Molecule 01 by Escentric Molecules - "Molecule 01 consists of one single ingredient, 'Iso E Super'. On its own it is less of an aroma than an effect. The wearer may notice a pleasant, subtle velvety-woody note which will vanish, then re-surface after some time, but more than this, she or he will notice the impact it has on other people. "Molecule 01 lends an indefinable radiance to the wearer," says Geza Schoen. In fact, its effect is almost pheromonic." --escentric.com

Scent Minimalism
It's like a riddle: What would a perfume that smells like nothing smell like? (Or, perhaps, why would anyone wear it?) ... But because this is the corner of the perfume world that attracts the esoteric, some scents take it one step further. One clue: They tend to have names that conjure up nothing found in nature, like Juliette Has a Gun Not a Perfume and Escentric Molecules Molecule 01. Not a Perfume contains a synthetic note called ambrox, which on its own smells faintly of amber, but can turn creamy, sweaty, or alcoholic, depending on the wearer. Molecule 01, a top seller at Aedes de Venustas boutique in New York City, is chock-full of Iso E Super, an ingredient that normally doesn't stand alone. The faintly sweet note with an alleged pheromonal effect, which means it never smells the same way twice, is included in Dior Fahrenheit and Cartier Declaration, among other perfumes. 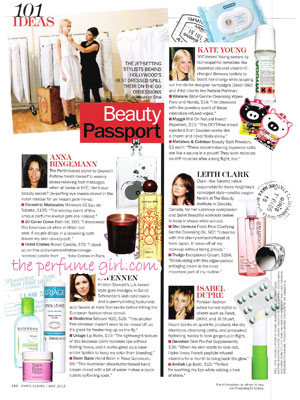 Beauty Passport
Anna Bingemann - The Perth-reared stylist to Gwyneth Paltrow treats herself to weekly stress-relieving foot massages when at home in NYC. Her travel beauty secrets? De-puffing eye masks stored in the hotel minibar for an instant pick-me-up.