Woman by Donna Karan "A fragrance created for women, by women. Feminine and Sensual. The strength and softness of Woman is expressed through creamy notes of orange flower, that delicately wrap the confident signature core of Haitian vetiver and sandalwood." --donnakaran.com

The Story
"I believe women are complex, and full of emotion and feelings. We have a unique ability to care and share and make the world a better place. When I approached the project I wove this idea of the multi-faceted woman into all aspects of the process." -- Donna Karan

The Scent
"I wanted to create a fragrance that would express the many facets of a woman... a celebration of their strength, passion, patience and tenderness." --Anne Flipe, Perfumer

The Bottle
"The bottle I designed examines sensuality and infinity; featuring a soft and sensual design that gently balances upon itself." -- Zaha Hadid 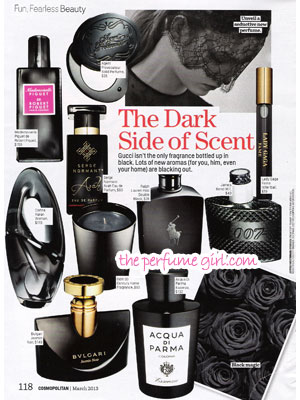 The Dark Side of Scent
Gucci isn't the only fragrance bottled up in black (Gucci Guilty Black). Lot of new aromas (for you, him, even your home) are blacking out.

Donna Karan Woman Fragrance
Discover the new fragrance inspired by all that a woman is. A fragrance created for woman. By women. Feminine and sensual. The strength and softness of woman is expressed through creamy notes of Orange Flower that delicately wrap the confident signature of Haitian Vetiver and Sandalwood. Available at saks.com. 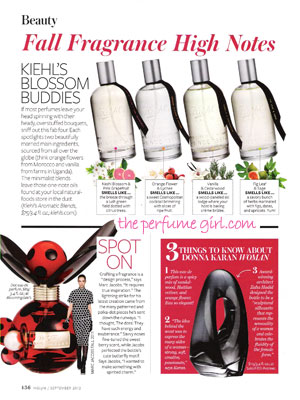 1) This eau de parfum is a spicy mix of sandalwood, Haitian vetiver, and orange flower. Eau so elegant!

2) "The idea behind the scent was to express the many sides of a woman -- strong, soft, creative, passionate," says Karan.

3) Award winning architect Zaha Hadid designed the bottle to the a "sculptural silhouette that represents the sensuality of a woman and celebrates the fluidity of the female form." 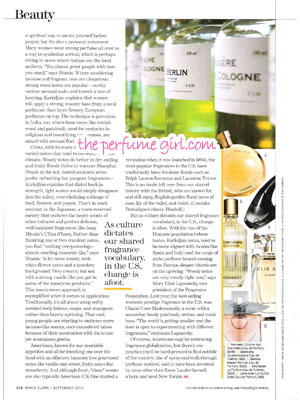 3 Model Moms
Donna Karan like women to feeel gorgeous and empowered, and she's poured that philosophy into her latest fragrance, Woman. Nearly everyone involved in its creation, from perfumer to bottle designer, is a mother, and the fragrance -- a sensual blend of orange flower, vetiver, and sandalwood -- launches this month with a hot-mom ad campaign feauting Karolina Kurkova, Liya Kebede, and Christy Turlington Burns. Karan chose the supermodels, who are in their 20s, 30s, and 40s, respectively, because they all have kids and support women - and family-oriented causes: Christy and Liya are working to reduce maternal mortality in developing nations; Karolina is involved in helping families of wounded soldiers.

The perfume's sleek bottle was inspired by the curves of a woman's body.
Donna Karan Woman eau de parfum, $85 for 1.7 oz. 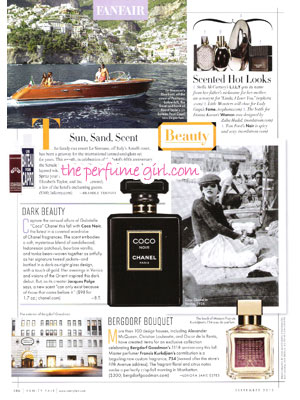 Stella McCartney's L.I.L.Y. gets its name from her father's nickname for her mother, "Linda I Love You" (sephora.com)

The bottle for Donna Karan's Woman was designed by Zaha Hadid (nordstrom.com)

Ready to Wear
There's more to a designer fragrance than scent alone. Here, the recipes for five of the season's hottest house blends.

Woman by Donna Karan
Donna Karan wanted her new fragrance to communicate a woman's intrinsic "union of softness and strength," an idea she explored in her boy-meets-girl fall 2012 collection, so perfumer Anne Flipo "wrapped" the traditionally masculine notes of sandalwood and vetiver -- which resonates through the base and heart of the scent -- with ultrafeminine orange flower. The bottle, inspired by "the curves of a woman's body," was designed by renowed architect Zaha Hadid, whose buildings Karan admires because "she can make stone look poetic, as if captured in motion."

All Woman
Donna Karan's new fragrance, Woman, combines strength by way of sandalwood and Haitian vetiver with a touch of femininity via orange flower. We brought it to three influential women to see if they found it empowering.

"It smells woodsy. It's leaves; it's sweater weather. It has ambition without being overwhelming." --Jane Rosenthal, producer and cofounder of the Tribeca Film Festival and Institute

"It smells like an elegant French scent. The powder makes it a lovely, not hit-you-over-the-head scent." --Brooke Garber Neidich, owner of Sidney Garber, cochairman of the Whitney Museum, and cofounder of the Child Mind Institute

"It's a little spicy, but clean. This is for somebody who has to go from work to cocktails. You throw this on and your high heels." --Dana Perino, cohost of Fox News Channel's The Five

View all DKNY perfumes and fragrances